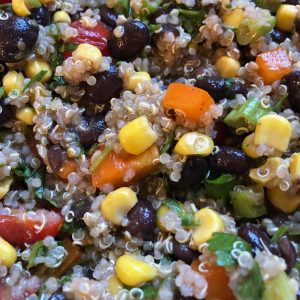 I had a hankering for a southwest beans and rice-type dish.  But rather than rice, I decided on quinoa.  Quinoa is so versatile.  It isn’t a grain, but it tastes like one.  It is an ancient seed crop from the Andes.  What is unique about quinoa is that it is the perfect food for vegetarians and vegans alike because it has all eight essential amino acids as part of it’s make up.  So I cooked up a delicious Southwest Black Bean and Quinoa Salad.

I’ve also been very mindful of including a wide array of veggies into my diet.  Every veggie has a nutritional profile that is unique, but might not necessarily offer everything a human body needs.  With variety, you’re more likely to have what you need in your food.   This southwest black bean and quinoa salad included a lot of what I had on hand.  It’s flexible, so if you don’t have one of the veggies, substitute it for something you do have on hand.  But the beans, quinoa, onions and dressing are not negotiable.

The dressing has equal parts vinegar/lime juice to oil which is how I like to make my dressings.  Most dressings you buy are 2/3’s oil to 1/3 vinegar creating a lot of extra calories you don’t need even if it is a good quality oil.  My dressing also included cilantro – an herb I love the taste of.  I know not everyone shares my affection for cilantro, but besides taste I have another reason I want to include this in my dressing.  It’s a chelator. 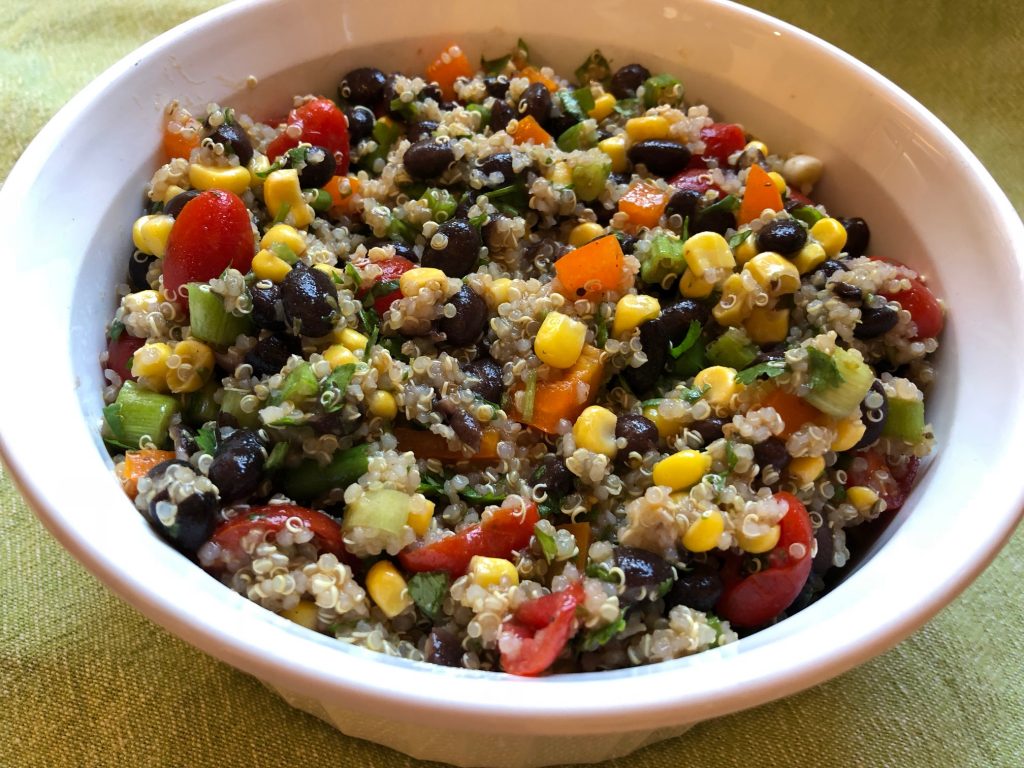 You might wonder what a chelator is.  A chelator (in this case compounds found in cilantro) is a compound that grabs onto heavy metals such as lead, cadmium, or mercury and takes them out of the bloodstream and delivers them to the kidneys to be excreted.  I recently discovered I have a toxic load of mercury most likely due to the mercury amalgam in my fillings.  Besides getting my fillings replace, I am treating my food like medicine – because it can be!  For more info on how to remove amalgam fillings safely, check out my Facebook post which shows how it is properly done.

But the other criteria I have for food, is that it has to taste good.  I think you will agree this recipe delivers.  Now for the recipe….

Whisk the dressing ingredients together and place in your serving bowl.  Add the quinoa and black beans and toss to evenly coat with the dressing.  Then add in the remaining ingredients and give it one more toss.  Allow the flavors to meld for 1 – 2 hours before serving.  To see me make this, click on this video.