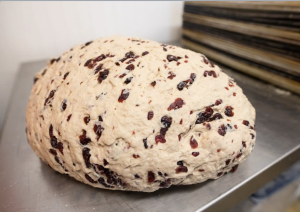 I know for a fact “Everything always works out for me”. I’d like to share a story our most recent vacation. It begins with my quest for cherry bread.

I was vacationing with my extended family in Door County Wisconsin. For those of you not familiar with that location, it is the peninsula that juts out like a “finger” if you’re looking at a map of Wisconsin. On one side is Lake Michigan, on the other is the body of water called Green Bay. And yes at the southern edge of Green Bay is the city of Green Bay – the home of the Packers!

It’s like Cape Cod of the Great Lakes and known for its cherries which were in season while we were there. Many people from southern Wisconsin and the Chicago area vacation there in summer. All that water moderates temperatures giving tourists respite from the heat and humidity.

I wanted to pick up some artisanal tart cherry bread at the bakery the next town over. We were introduced to this bread on an earlier trip and loved it so much, the bakery was our first destination of the trip. We drove to the bakery only to discover that it had been closed for almost two weeks while the owners recovered from CoVid. What a bummer – for all their clients, but especially the owners who relied upon summer sales to carry them through the winter.

During our stay, we stalked their Facebook page because they said they would let everyone know on Facebook when they were ready to open. We heaved a collective sigh of relief when they announced their re-opening the day before we were leaving. I knew I had to get there early because everyone else loves this bread too.

I left in a hurry and halfway to my destination I realized I left my phone at home. Then I glanced at the gas gauge and realized I was almost out of gas! I forgot to fill up the tank before leaving. Since I was halfway to the bakery, it made sense to continue and I was looking forward to picking up the bread and to filling up my tank.

The bakery was crowded. When it was my turn to order, I asked for the cherry bread. I looked at the shelves that were fully loaded as the owner explained that all the loaves were already pre-sold. But then his wife overhearing my disappointment, spoke up saying I had perfect timing! She was carrying a tray of six hot loves of cherry bread that had not yet been spoken for and this was all the bread they could make for the day! I bought 2 loaves (even though I wanted all 6). Other people were looking forward to this bread too. As I was paying for the bread, I asked where the closest gas station was. I then learned it was the next town over.

I started down the road without my phone, no gps, not knowing exactly where I was going. There wasn’t much traffic on this two lane highway and it was hilly! I stared at my dash that showed I had about a 22 mile range! Now that gas gauge has lied to me before and I didn’t trust it! That’s another story… I drove carefully being sure not to speed or brake unless needed in order to maximize fuel efficiency. I was thinking my car was going to kill half-way up a hill. I started freaking out a bit!

But I caught myself realizing:

* I secured 2 coveted loaves of hot cherry bread and I had food in case I needed it!

* It was a beautiful sunny day and the temperature was mild.

* I didn’t need to use the bathroom.

* I knew someone would help me if I had to pull over.

* I was on a scenic by-way highway and saw the beauty whizzing by.

I decided to turn off the radio and kept repeating:

I kept repeating that until I saw the gas station. I pulled in and never was quite so grateful to fill up my tank. The extra BONUS: gas was $.20/gallon cheaper than the station close to our rental!!!

I headed back towards our place, on top of the world. I had a full tank of gas that I didn’t cost me as much as I had thought it would. And next to me were my 2 loaves of wonderfully fragrant cherry bread on the front seat. I decided to stop at a farmer’s market and pick up some fresh cherries on the way back home. While I was making my purchase, I heard someone calling my name. I wondered who would know me so far from home? I turned and saw a high school classmate that I hadn’t see in decades other than on Facebook! We had a nice chat and then I drove home.

When I arrived, I discovered the other car was missing. My husband was trying to find me because he realized I probably forgot to fill up the car and may very well be stranded. Since he knew my destination, and there were only 2 ways to get there, he was driving the loop hoping to spot me. I located my phone and called him to let him know I was home. He was so relieved that I had secured 2 loaves of cherry bread and that I had made it home – in that order :-). He had my back! Again I was ever so grateful.

It was then that I realized EVERYTHING WORKED OUT FOR ME! Even better than I had imagined.

Was I experiencing the Law of Attraction? Did the Universe conspire to help me? Would the outcome have been different if I had continued to freak out? I don’t know. But the ride sure was more pleasant thinking about my blessings.

Remember, you have the power to shift your mindset to look for what is working for you instead of what’s not. When you’re positive, you think more clearly, you’re smarter, people like you and want to help. The next time you’re in a sticky situation, look for what is going right and maybe, just maybe, the Universe will conspire to have everything work out for you too.

If you’d like to know how I help clients shift their mindset and disempowering beliefs, book a 15 min call with me. I love meeting new people and will share how I can help your create a stronger positive mindset.